When Kristi Soomer launched her sustainable clothing brand Encircled almost a decade ago, she wanted to make sure her products were planet-friendly and socially fair.

When Kristi Soomer launched her sustainable clothing brand Encircled almost a decade ago, she wanted to make sure her products were planet-friendly and socially fair.

Fashion has grown into a US$3-trillion-a-year global industry largely because it is built on the premise of buying cheap and changing with the seasons. It’s called fast fashion.

“The fashion industry is notorious for exploiting labour and the environment,” Ms. Soomer says.

Toronto-based Encircled Inc. is a certified B-Corp., meaning it passed a third-party assessment of the company’s social and environmental performance from raw input materials to worker wages. Encircled’s clothing and accessories are produced in Canada with 75 per cent biodegradable materials.

“It definitely adds complexity but I think it has been worth it,” says Ms. Soomer, whose company is part of what’s known as the “slow fashion” side of the industry. “Finally, I’m starting to see people interested in the why behind our brand and our values, which is exciting.”

As climate action becomes increasingly important to consumers and corporations, Ms. Soomer’s persistence is paying off. Encircled, which sells directly to consumers (online only for the time being), saw double-digit growth last year despite the pandemic.

But cheap-and-chuckable apparel could be headed for a reckoning.

In that time, consumers changed, it says. Fashion leaders will need to overhaul business models that exploit people and the planet, McKinsey says.

The fashion industry is responsible for 10 per cent of annual global carbon emissions, more than all international flights and maritime shipping combined, according a report by the World Bank Group released prior to the pandemic. At that pace, it says, the industry would increase its greenhouse gas emissions by more than 50 per cent by 2030. That’s the opposite direction of the reduction targets set out in the United Nations Paris Agreement on climate action, which is to limit global warming to well below 2 C, preferably to 1.5 C, compared to preindustrial levels.

“They have a long way to go, but most industries do,” says Coro Strandberg, president of Vancouver-based Strandberg Consulting, an expert in corporate sustainability and social responsibility.

Canada lags other countries, Ms. Strandberg says, but believes change is starting to happen in the industry. For instance, she cites Metro Vancouver’s Textile Lab for Circularity, which aims to divert the 22,000 tonnes of apparel that goes into area landfills every year.

Arc’teryx and Lululemon Athletica Inc. are two Canadian apparel companies that have signed the UN Fashion Industry Charter for Climate Action, Ms. Strandberg points out, an initiative to reduce sector GHG emissions 30 per cent by 2030 and achieve net-zero by 2050.

But industry alone won’t get there, Ms. Strandberg says.

“If we leave it to these pioneering companies, the Patagonias, the Lululemons, to innovate and transition their supply chains and their products to be circular, low-carbon and regenerative, we could be 10 years along and we’ve barely moved the needle,” she says. “You can’t do this work one company at a time. You have to work at the sectoral level, at the whole-industry level.”

The federal government, which will host the World Circular Economy Forum later this year, has a role to play, she says.

First, it can level the playing field with regulations such as carbon pricing, a landfill ban and/or extended producer responsibility, which would require companies to take back end-of-use products for recycling.

Second, it can enable companies with financial and tax incentives to decarbonize and innovate, and it can help set up sector-wide take-back and sorting systems for recycling.

“Right now, it’s an uphill battle because the entire logistics system is set to take the goods from the farm or the factory and put them in the landfill. That’s the system we have in place and that is the cheapest system there is,” she says.

For example, the European Union is funding a circular economy initiative called the New Cotton Project, which recycles the used textile.

“We aren’t seeing these kinds of investments in Canada,” she says.

“The Canadian industry has been slow to engage in sustainability but, in the past couple of years, we are finally seeing some progress,” says Kelly Drennan, Fashion Takes Action’s executive director.

More Canadian brands, large and small, are becoming B-Corp. certified, “which is not an easy feat,” she says.

There are a few key components to accelerating green fashion in this country, Ms. Drennan says, including government policies such as extended producer responsibility and changes to federal duties to discourage retailers from destroying unsellable goods and excess inventory.

Government and industry can also invest in research and development of sustainable technology, she says, as well as ensure transparency and accountability from the industry when it comes to environmental performance.

“We don’t have time to duplicate efforts or reinvent the wheel,” she says. “There are too many problems that need solving so it’s best that we align our efforts because we will get to where we need to be much quicker.”

Still, one of the greatest challenges is overcoming the consumer demand for newness, says Katie Wilson, senior manager of sustainability for Vancouver-based Arc’teryx.

“That’s a demand that consumers have and that’s part of what’s created this cycle of overconsumption,” Ms. Wilson says. “It’s not easy and it’s certainly a challenge we have to face: How to provide a sense of newness without turning out a bunch more product.”

Arc’teryx, which works with 20 factories in about a dozen different countries, has always offered repair services. The used gear marketplace recently launched on its U.S. website, but Canadian customers can bring gear trade-ins for discounts.

“That’s one of the ways we’re getting after our climate goals is to really invest in business models and product offerings that don’t require us to build new product,” she says.

Clothing resale is one of the fastest-growing segments of the fashion industry. In the United States, the second-hand apparel market is forecast to reach US$64-billion by the middle of the decade, up from about US$28-billion today, according to a report from ThredUp and GlobalData Retail. The report says second-hand goods are expected to make up 17 per cent of a consumer’s closet space by 2029, up from just 3 per cent in 2009.

Consignment and second-hand apparel in Canada was worth an estimated $2.4-billion to $2.8-billion in 2018, according to a report from Trendex, a marketing research and consulting firm.

“It comes down to businesses and individuals making decisions to act and find a path for progress, not perfection. We don’t really know the answer. It’s been uncomfortable for us to make goals that are big and scary but also important to drive action.”

PrevPreviousAre you ready to take your business on the journey towards becoming B Corp Certified?
NextYou Don’t Need Fast Fashion In Your LifeNext 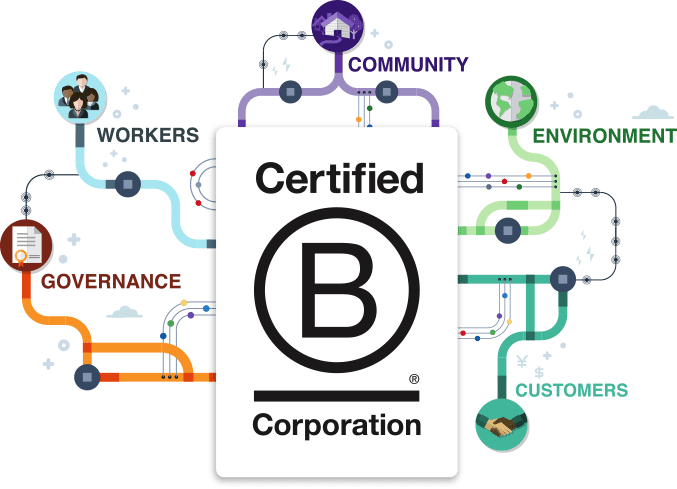 Are you ready to take your business on the journey towards becoming B Corp Certified?

How Canadian companies are helping to reduce fashion’s carbon footprint

You Don’t Need Fast Fashion In Your Life