This effort to make fashion circular was made possible by the generous support of the Ontario Trillium Foundation Collective Impact Grant. Our group includes over 40 stakeholders – charities, collectors, retailers, brands, academics, municipalities and NGOs. We are now the Ontario Textile Diversion Collaborative, and we have identified 4 priority areas with respect to pre and post consumer textile waste:

At FTA we are not interested in duplicating efforts or re-inventing the wheel. Simply put, we don’t have time for that. In order for us to get to where we need to be, as a global industry, we must join forces and truly collaborate.

According to the Council for Textile Recycling (2014), 85% percent of all textiles are going directly into landfills rather than being recycled or reused. This is a huge problem because natural textiles biodegrade in landfills, producing CO2 and methane emissions which contribute to climate change; while synthetic materials do not biodegrade and instead stay forever in landfills (Fletcher, 2013).

Solving this problem would require all textiles to be collected and diverted from the waste stream. This is a simple solution in theory, however the processes required to achieve it are complex. It requires the consolidated efforts of numerous stakeholder groups and millions of citizens.

The solution also depends upon changes in social and technological processes. New social developments have increased awareness about the problem and inculcated a desire to solve it, offering an opportunity for change.

However, conflicting interests surrounding textile diversion, coupled with a lack of industry, governmental, and academic perspectives, has contributed to the uncertainty about how to solve the issue of textile waste.

In order to change a system, it requires participation from public and private sectors, as well as civil society. Our group consists of residential, industrial, commercial and institutional sectors, with a variety of perspectives (academic and non-academic) including textile collection agencies, municipalities, the fashion industry and government.

Municipalities were included since they manage the residential waste and recycling services in their respective areas according to mandates set by provincial governments. Each municipality in Ontario is responsible for developing its own waste management program pursuant to provincial laws. Municipalities, or cities, can therefore take an active role in textile waste diversion, and can also influence the diversion of textiles from the waste stream within their area by delimiting rates at which charities collect textiles.

Industry stakeholders, meanwhile, as for-profit players invested in the business of textile collection (more so than charities), could serve as a powerful and influential sector in diverting textiles. Currently, industry stakeholders mainly contribute to textile waste and take passive, or often negative positions towards extended producer responsibility, including clothing that enters the landfill.

The following stakeholders are participants in the OTDC:

It is amazing what you can accomplish if you do not care who gets the credit.

Our Theory of Change 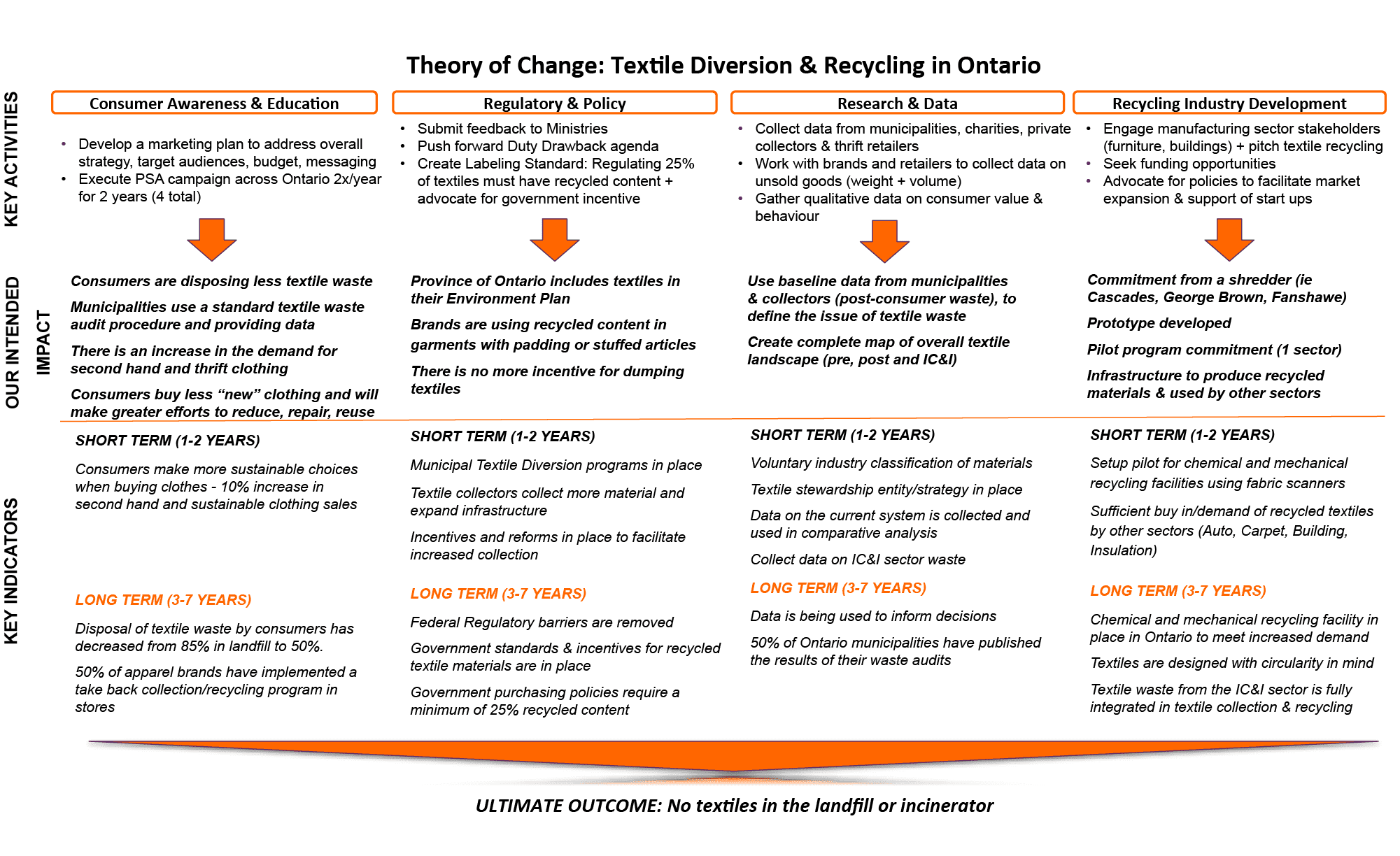 To be successful in business, and in life, you need to connect and collaborate.

If everyone is moving forward together, then success takes care of itself.

Great things in business are never done by one person; they’re done by a team of people.

Your donation helps us reach our goal of $2500 and directly helps Fashion Takes Action deliver youth education programs to 10 schools and 300 children!